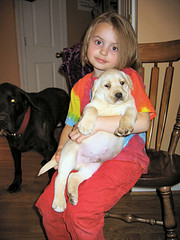 After church today, we drove up to Chambersburg to see a Labrador Retriever puppy my mom had seen in her local pet store, who was supposedly from a local breeder. We’ve been cautiously pondering getting a puppy now, before we consider trying for another baby, and while Chip (our old dog) is still around to interact with the puppy a bit. I’m not too fond of buying puppies from pet stores, as one never knows if they’re from puppy mills. The puppy there looked kind of runtly to me, though of course it was very sweet. But they wanted almost $1000 for him, and I just thought that was ridiculous. So, we chatted with my mom a bit, and while looking through her local paper, we saw a couple ads for Labrador puppies. We called two numbers, but nobody answered, so we headed home. On the way home, we got a call from one of the breeders. To make a long story short, we took a drive out through some beautiful Pennsylvania scenery to a town about 30 miles from us to see the puppies. I really thought we’d just let the kids visit with the puppies, and maybe make a contact for the future when we were ready to get one, but as soon as we saw them, I knew we’d have a new addition to our family. They were all adorable, so it was hard to choose, but we ended up coming home with a sweet little yellow lab, whose name has yet to be decided upon. I figure I might as well get through the puppy stage now, because if we do try for another baby, having a baby and a puppy might push me over the edge. This way, the puppy will be at least a year or so old, and well adjusted to life in our chaotic household. That’s my theory anyway… get back to me in a year. The kids are very excited, especially Flo, who is elated. For at least two years now, I think she’s asked me almost everyday when she can get a new puppy. Maybe for the past six months, I’ve been secretly considering it a possibility, so it doesn’t feel too impulsive, though I know I’ll probably be in for a few sleepless nights in the upcoming weeks. We got Chip just about the same time of year almost twelve years ago, so it’s kind of a nostalgic experience, as well.