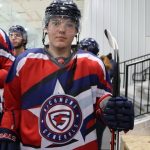 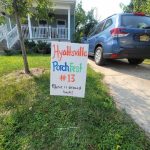 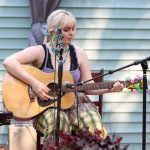 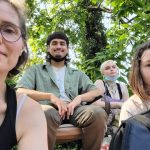 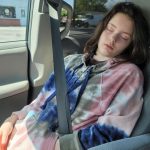 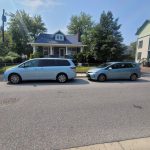 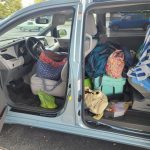 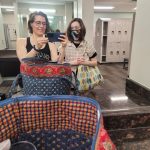 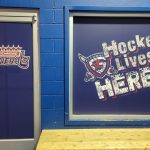 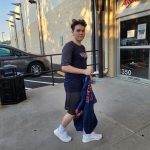 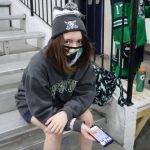 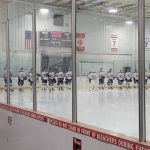 Minivan Adventures – September Edition
~~~
Just to highlight that, with the right perspective, even the most simple routines can be adventures, I’ll recount the happenings of last weekend…

I thought it would be fun for Zofia and I to take a weekend trip to see Joe’s first game of the season with the Richmond Generals on Saturday, and catch Flo’s performance at Hyattsville PorchFest on the return trip on Sunday.

Considering college and junior hockey are not cheap endeavors, I decided that we’d skip the hotel this trip, in favor of the frugal “car camping” option, since evening temperatures are pleasant right now, and why not? I tried to sell the idea to Zofia as an adventure and opportunity to get out of her comfort zone. She was not sold on my travel vision, but she soldiered through.

We got to Richmond Friday afternoon, had dinner with Joe at Whole Foods, meandered around some shops for a while, then settled into the Cabela’s parking lot around dusk (along with about six other travelers, one of whom had a giant motor home, which I became increasingly jealous of as the night wore on).

Not surprisingly, no restorative sleep was had on Friday night in the minivan. Between my aging bladder, street lights in my face (although covid masks make good sleep masks, fyi) and the lumpy metal seat bracket that can’t be removed from my 2017 Toyota Sienna (a mom definitely did not design that), by 7am I surrendered to the fact that I was going to push through the weekend with less than optimal rest. I settled for a few more hours of dozing on and off, before declaring our sleep-in-the-car experience officially over!

Thankfully, I had recently realized our YMCA membership could be used when travelling, so a hot shower at the Shady Grove YMCA and a picnic in the park restored my weekend adventure spirit enough to perk up for the remainder of the day. Though, after Joe’s game that night, a strong cup of coffee (organic light roast with almond milk, so it’s a health food) was necessary for the two hour drive from Richmond to College Park, commencing at 11pm.

Aside from the last harrowing ten miles through the metro area, the drive was uneventful, and we got to Flo’s apartment around 1am and unloaded our stuff on her sidewalk. Then, I proceeded to circle the block for a half an hour trying to find a place to park. Finally, around 2:30am, sprawled out on Flo’s roommate’s futon (thanks Matt), the onset of some quality sleep occurred.

I woke up at 8am to briefly bid Flo farewell as she headed off to a four hour shift at Starbucks. It felt like I just blinked when she got back around noon, at which point, I launched into “get ready” mode, before heading to the grocery store for a few nibblets. Then, Zofia and I made our way to Hyattsville to meet up with Flo and her friends at Porch #13, where Flo would perform a set of her songs, while I plopped down on a blanket, grateful for the host’s well-shaded backyard.

Overall, the minor discomforts of the weekend were overshadowed by the opportunity to do a few of my favorite things; watch Joe play hockey, see Flo perform, and try to facilitate interesting experiences for Zofia! Though you won’t see us signing up for more van camping anytime soon, there will no doubt be more adventures to come in the minivan! 🙂