Summer is rolling right along… We complain about the heat, but it's tempered by the knowledge that we do that every year, and before we know it, we're complaining about the cold. Thankfully, today is not very humid, and there's a nice breeze, so the heat isn't quite as opressive. 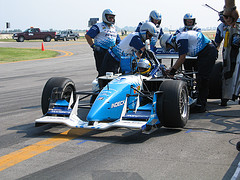 Darren enjoyed his trip to Cleveland at the end of June for The Champ Car World Series. He taped the race, then watched it when he got home, but he wasn't on TV… oh well.

We just got back last week from Vegetarian SummerFest in Johnstown, PA. I posted a few pictures of the week. It was a great experience, and we got the chance to hear a lot of prominent activits and experts speak on the topics of health, environment and animal welfare. We also got to enjoy gourmet vegan food for five days, and in keeping with any good vacation, we ate entirely too much of it.

Darren is working overtime today, which tends to make the week drag. But, money is money, and one cannot refuse the opportunity to make some extra. Well, I suppose one could refuse. After all, one's time can be an equally valuable commodity. Still, considering our robust mortgage payment, and monthly flood of bills, we choose to seize any (legal and moral) chance to bring a little extra funds our way.

Our computer crashed last week. I lost all my email, calendar and contact data for the past six months. I'm quite unahppy about that, but at least all major files and photos were on our external hard drive. Anyway, the computer was an easy fix with a new hard drive, but considering it's more than several years old, we decided to treat ourselves to a new one. Rather than order one, we decided to just go into Best Buy and get one with reasonable features. We opted for the Gateway 831 GM. Not bad at all.

Joe just had a "blow-out"… PU… I took him out in the yard and just hosed him off. Poor guy. This happens occasionally, generally as a result of an allergic reaction. We had Japanese food last night, and as careful as I am asking about ingredients, sometimes things happen. The day we got back from Summefest, his left eye was all swollen up to his eyebrow. Weird things happen like that all the time, with no apparent trigger. It's rather frustrating, although even with some of the more severe hives reactions, he never seems to be in too much discomfort, and they generally pass fairly quickly. So, I suppose things could be worse, though it's still scary sometimes.

Well, off to scrounge through our rather bare cupboards in search of something to throw together for dinner. We might take a ride when Darren gets home to go visit a friend from work who just had a new baby last week Oooh… cuddley-wuddley… Then tomorrow we plan to do absolutely nothing, considering it's Darren's only day off. He needs to recharge, so he can do it all over again next week. Fun!

Have a great weekend!