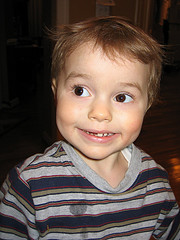 I was totally stressed out today worrying about Joe and his appointment with the oral surgeon. I have worked for the past two years to keep his “boo-boo tooth,” as we called it, in good condition, as it had an exposed root, and was difficult to keep clean. We were hoping to keep it in until he was older, and closer to getting his permanent teeth. But, after it got cracked, he was obviously in some major pain, so I scheduled an appointment for him to be seen. I was thinking he’d have to be sedated and maybe the extraction would have to be done in the hospital, due to his heart issues. However, the dentist said he felt comfortable doing it right there in his office. I was nervous about this, but scheduling a hospital appointment would take at least a month, and Joe would have to be put on antibiotics and maybe pain killers just to wait for the hospital. Then there are risks with anesthesia, too. Also, his birthday is on Sunday, and I’d hate for him to be miserable then. That would be no fun.

So, Joe was really mad and upset during the whole experience. However, he got one shot of numbing stuff, got the tooth yanked, and a few stitches put in, in less than five minutes. When the dentist was all done, Joe sat up and looked at me and said “Help me!” I felt like a mean mommy, but I know he’ll be happier than he’s been recently, waking up in the middle of the night yelling “OWWWEEE!” After the brief trauma, he got to pick a goody from the goody box, and gave the dentist a scowl on the way out. So, because the tooth developed abnormally, and was either one tooth split or two teeth fused together, he’s now missing two teeth. Still, even though his permanent teeth might be delayed a bit as a result, I’m just glad he’ll be feeling better soon, and that it’s finally over. I’ve worried about this tooth for over two years, concerned it would abscess, cause infection, or affect his heart. So, deep breath. At least that’s one less thing to worry about for now.