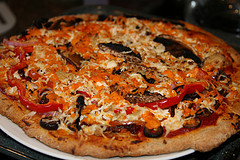 This month has proved to be a real challenge. For some reason, Joe is really acting up, and sibling rivalry between Flo and Joe is at its peak. We spent most of our time diverting Joe’s attention, and just trying to clean up the daily aftermath of having three kids. I was sick for a few days, and fell behind on housework, and then it just feels like climbing a mountain to catch back up. But, I’m sure I’m not alone in this challenge, so I’ll avoid complaining… too much!

Another good-parenting highlight surfaced this month when Flo blurted out the “F word”! I told her to let Joe go get the mail, and she ignored me and practically plowed Joe down trying to get out the door first. When I got mad at her, she said “I’ve been waiting all morning to get the “f*****n” mail!” It was one of those moments where my instinct was to laugh because it just sounded so out of character, but I promptly maintained my cool and sent her to her room to reflect. We didn’t get mad, but later sat down with her and pointed out that it’s not the most appealing language to use, and one should try hard to think of more descriptive adjectives!

Oh, here’s an additional little snapshot of our month thus far… Picture us standing in line at the Whole Foods Market store in Annapolis, Maryland. We had gone out for a daytrip, and had stopped for a late lunch. Joe is pestering Flo, Flo is whining because he’s pestering her, and Zofia is screaming in her stroller. We’re waiting patiently to check out, so we can feed the kids (and ourselves) and hopefully have a momentary break. Then, someone made the mistake of moving Zofia and her stroller a little too close to the shopping cart, and she promptly grabbed my cup of coffee (which thankfully was not hot), and dumped the whole thing (it was full) in her lap. She really didn’t mind that, but when I took the coffee cup away, she went into an all-out fit. Keep in mind, it’s Saturday, and the store is very crowded and rather small for the size of the area. We are totally blocking the flow of traffic as we scramble to clean up our mess, all the while, Joe is saying “Can I get a bagel, can I get a bagel, can I get a bagel?” That little voice in my head kept saying “Deep breaths!” The little voice was very helpful, because I got through that whole episode with minimal elevation of my blood pressure, and without yelling at anyone. Nonetheless, it just reinforced the challenge of taking three kids out and expecting to have a relaxing day. Probably not a realistic expectation. Oh well. I’m sure we’ll give it a try again sometime soon.

Still, even with the obvious stresses we encounter as parents, we’re really enjoying ourselves. Zofia is ten months old now, and just about walking. She’s not quite confident enough yet to take more than a step or two on her own, but she’s really curious and full of energy. We’re all enjoying watching her figure things out.

Darren did get to enjoy his eighth Father’s Day relaxing at home, while the kids and I made him pizza. My gift to him was to not roll my eyes or sigh too loudly when he played his Game Boy video game, and to let him relax as much as possible, despite the frequent conflicts between Flo and Joe, and general chaos that seems to engulf our house. Still, I think he had a fairly enjoyable day and got to reflect upon the joys of fatherhood.

So, we’re halfway through the month. I wonder what other exciting adventures the Petite Family will encounter as we head into Summer?